The mechanical components known as fasteners are used to attach two or more items together. Depending on the site conditions, fasteners might be used to attach permanently or temporarily. There are many different kinds of fasteners with various uses that one should surely be aware of. Nails, rivets, and other single-use fasteners used to permanently link two items are examples of permanent fasteners. Therefore, once put, these fasteners cannot be withdrawn; doing so might cause them to be destroyed. Temporary fasteners, on the other hand, are made to temporarily attach two or more things together and are simple to take out and reuse. If you are looking for Fasteners Suppliers, then RPPL Industries is one of the top manufacturers and suppliers. 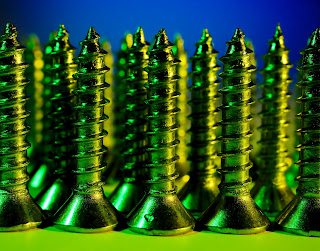 Here are ten types of fasteners that are most often used:

A nut is usually used in conjunction with a bolt, which is a threaded fastener. Male threads are exterior on bolts and internal on nuts. A bolt has a head, a cylindrical body, and threads along the length of it. Bolts often have a flat head, which implies the head has no groove. It typically has a design on its edge that may be pushed by a wrench tool, and the same is true for nuts.

Screws are adaptable fasteners with strong holding capabilities. They are built similarly to bolts. But unlike bolts, they don't require anything to hold them in place.

These are thin plates that are shaped like discs with a hole in the centre. The outside diameter of these plates is often twice as large as the inner diameter, and they are used to disperse weight across fasteners like screws and nuts. In several applications, they can also be employed as a wear pad, locking mechanism, or spacer. As needed, it can be made of rubber, plastic, or metal

It is referred to as a headless bolt. A stud is a reasonably long rod with threads on both ends that might go all the way around the rod. Before a nut is placed on it, the stud must first be tightened in the hole of the component to be linked with it.

It is a permanent fastener made up of a head, shank, and tail. Therefore it cannot be taken apart without causing damage to the joints. It can be done manually or with a power tool. They have a very powerful temperament.

Fasteners are called anchors to serve a similar purpose as a boat's anchor, which protrudes into the bottom and keeps the ship from moving.

Strong threads of this sort, which are typically cylindrical, are sometimes referred to as thread bushings. They have a variety of uses, including establishing robust connections between various materials and mending stripped threads.

It is a short, flat-headed metal spike that is inserted into the wood to keep objects together or serve as a hook. Since their first use, nails have evolved into a common household item.

Retaining rings are a particular kind of fastener used to secure shafts or components. They often come in a variety of forms. They are employed in several equipment applications.

Popular posts from this blog

Getting A Much Needed Local Math Tutor

By anujvashistha May 05, 2022
When your kid comes in from school with a frown on their face and in a bad mood from math class, it may feel like you can’t help them. School can be difficult for kids, and when you add additional struggle in there, it can make it feel unbearable.  As a parent, there’s no doubt that it’s also difficult to see your child struggling with math. This being said, there are so many ways to help your children! From figuring out ways to teach your child math to find them the right person from your math tutor , there are so many options.  Here are some warning signs that your child is struggling with math:  - Their grades are dropping either just in math class or with other subjects as well - They have a bad attitude towards school or towards math - School has started giving them anxiety  - They are struggling with either starting or finishing their math homework at home, or put their homework off entirely.  - They are struggling with day-to-day math, like checking the time or doubling a recipe
8 comments
Read more

Things to Look for in a Math Learning Centre

By anujvashistha May 03, 2022
Since the millennia, arithmetic has been and always been an essential part of the curriculum. Pythagoras, the Greek philosopher, and a mathematician were the first to attempt to codify the underlying scientific laws of the cosmos using mathematical. For some kids, mathematics is exciting because of the gorgeous geometry, the straightforward solutions, and the pure joy of completing a small problem. However, simple mathematics may be a source of stress for certain people. That's why there are lots of Math Learning Centre that offer help for these students. Even if a student does not want to pursue a career in engineering, a firm grasp of fundamental arithmetic and a strong performance in math classes at school may open many possibilities. Your children may use abilities in math and numeracy to: ✔ Developing and promoting finances ✔ Accounting and tax-filing freedom for small businesses ✔ Enhancements in routine chores like house improvement and foreign exchange rates have been made
3 comments
Read more

Shipping anything from USA to Costa Rica

By Vishal Sharma April 11, 2022
Are you going to ship anything from USA to Costa Rica? Or are you planning to relocate to Costa Rica and need to ship some of your household items? If yes, then you need to know the groundwork for shipping the items to Costa Rica from USA.   Here are some of the documents that have to be taken into account when Shipping to Costa Rica : Shipping paper work: 1.        The required documents for shipping to Costa Rica will vary based on the nature of the shipment but the basic paperwork will include: a.        Commercial invoice or export license if you are exporting commercial products b.       Bill of lading for ocean cargo and airway bill for air shipments c.        Packing list that are itemized d.       Insurance certificate e.       Certificate of origin. Although it might seem that there is a lot of paper work required with shipping items to Costa Rica, it is not a complex process if you have a good shipping company to help you with the entire process. The shipp
Post a Comment
Read more

This just a demo text widget, you can use it to create an about text, for example.